The Typewriter's Tale by Michiel Heyns 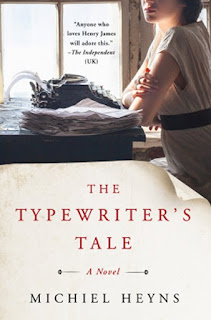 This one the first, resonant message emerging from the stunning, beautiful novel The Typewriter's Tale published today by St.Martin's Press and written by Michiel Heyns.

If you can think at first starting to read it that the book can't absorb you, the intrigue will conquer you immediately.

I choose this book because I love Henry James' books.

Her Portrait of a Lady enchanted me when I was 18 years.

James a genius in discovering lacks, greatness, goodness and badness of the human soul.

Thanks to this book I discovered many anecdotes of this writer and his family that I didn't know: from the Fletcher's theory of mastication to the funny, absolutely funny observation that made me laughed a lot and that the typewriter will put on the "mouth" of her lover in the Journal she was writing in about health and James' family's relationship with it:

"The whole family [James] is obsessed with health, and as a result suffer from a variety of ailments unheard of in the annals of medicine. It is my theory that they positively bring on ailments in each other."

Said that, you will be curious to discover something more of this precious, very researched novel.

The story is real, the conspiracy realistically existed and involved the typewriter of mr.James here called Frieda and Morton Fullerton one of the best Henry James' friends, let's use this euphemism.

Mr.Fullerton worked at The Times of London during that time, and he was a guest at the house of Henry James like also Mrs Wharton with which he established a passionate relationship in th while.

People of great culture, very rich, their life has never been difficult in the common sense of the word, and they have always had the best. Best men, best women, best clothes, best travels, best everything. A privileged circle of people.


Frieda, chosen by Mr James thanks to her qualities as typewriter was working for him from various months when one day she meets Mr Fullerton who stopped by for a visit at Mr.James' house.

Of course the man a fascinating one. Let's imagine the man of experience, the 23 years old and a bit shy girl conquered by him.

Maybe Frieda imagined that it could have been possible.

Possible also for her to being loved by someone of that privileged circle.

She donated her body to Mr.Fullerton with great simplicity but Mr.Fullerton didn't want the body of a typewriter because in love for her and let's imagine that it wasn't for  sex urgency either, considering the lovers he had and reputation as libertine he developed with the time, but simply because he wanted to use this ingenuous typewriter for his purposes and Mr.Fullerton knew how powerful could be sex for obtaining something in return.

He wanted to return in possess of some letters according to his point of view too much compromising sent to Mr.James and considering the frequent illness of Mr.James it would have been great to have them back.

If Mr.Fullerton considered the sexual meeting with Frieda like a routine and another woman without importance added to his conquests, laughing of the availability of this girl with his rich and acculturated friends, including Mrs. Wharton, the girl still ingenuous started to fall in love for Mr.Fullerton.

The idea of this wonderful, absolutely perfect man who was asking her to destroy a precious word as trust between her and  Mr. James didn't alarm her. No: she started to searching for these letters.

In the while and waiting for the return of her "Prince Charming" of the situation she started to write a Journal . The protagonist: herself and her beloved object of desire: Mr.Fullerton.

Mr. Fullerton didn't have any kind of serious purpose on Frieda and I think that he hadn't never thought for a second that he could have taken in consideration a choice like that one: the typewriter, a girl socially inferior respect him, culturally, sexually and with a different background but the insanity of his gesture, followed enthusiastically by the typewriter, repeated, brought the typewriter in a condition of perennial ecstatic dream able also to ruin her good relationship with Mr.James based on trust.

I found impressive to seeing Henry James in action while he was writing a book. Or better: imagining how a book was written at that time. There was more life, not a desktop, not a PC, not solitude in a word, but interaction.  Someone real in front of us with which sometimes to speak, to interact.

I loved when the relatives of Mr.James William and family afforded from Boston where they lived to England in vacation.

They brought the typical energy of that city I love so badly in the pages of this book as well.

The typical enthusiasm of Bostonians always ready for fighting for new causes and new injustices and new goals to reach.

Miss James, the daughter of William was fighting as a  suffragette for trying to obtain more space for women. We are at the beginning of 1900.

Miss James interested in a medium able to connect her with her beloved aunt Alice.

She asked at the typewriter...

Also in this part of the book I must try to understand if miss James was honest with the typewriter or simply she used her for trying to see if the girl was honest or a manipulator, manipulated by Miss James in this case without to think who she had in front of her. Miss James could simulate surprise or shock or astonishment with simplicity.

I think I later found the answer when Mr.James burned some documents.
The Typewriter tested also from James' family.

It's a book, The Typewriter's Tale that will let you think a lot about manipulation, manipulative people, hidden purposes, broken friendship and trust.


Not only:when the typewriter discovered that an affair was going on between Mr. Fullerton with Mrs. Wharton and the adopted sister (in this second case she was his girlfriend) she was shocked, maybe thinking that a man like Mr.Fullerton would have become in the while a friar waiting for another encounter with her after more than a year or two.


It's a book that will let think of being more prudent in choices, and more diffident if a novel can teach something.

Under some aspects I would compare it at Les Liaisons dangereuses by Pierre Choderlos de Laclos although in very little measure.

Highly recommended for sure!

I thank NetGalley and St.Martin's Press for this book.