The Fight for Freedom by Geoffrey C.Harrison and Thomas S.Scott 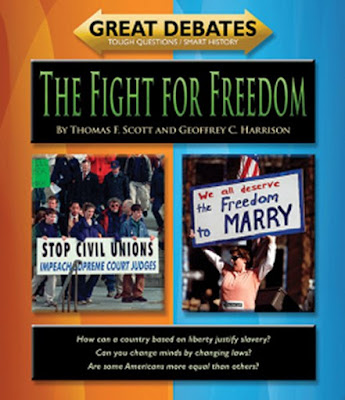 What is freedom? How many freedoms should exist in the world? And should we speak of more freedoms or just a word: Freedom for classifying the human rights of people?

Should we give at freedom a limit or each of us should be treated with dignity?
If there are more than a freedom how many freedoms we all can pretend for us and our dear ones because of our necessities?

Let's say that the sum of many freedoms we obtain in a society gives just a word: Freedom.


Reading the beautiful scholastic book written by Geoffrey C.Harrison and Thomas S.Scott The Fight for Freedom, something is extremely clear: that maybe the American Constitution can have also its own age, but that for sure, each citizen of the so-called Land of Freedom and Opportunity fought with all himself/herself for seeing his/her rights recognized in all the States and sometimes it was a heavy, hard and stimulating battle.

Made the Constitution it was clear that it was necessary to talk and fight for  Human Rights.

This one the biggest problem.

Every American in particular if in some of the groups we will analyze, for obtaining the freedom of expression has fought also losing the most precious thing existing in this world: their life. An example: Reverend Martin Luther King.

Americans are real fighters, because they understood very soon that for obtaining something it was necessary to fight.

Every Constitution is wonderful and speak universally for all the citizens of its country.

The American Constitution is beautiful and not different from the other ones.

Some passages: "All men are created equal" and every human being should search and go for  "Life, liberty and the pursuit of happiness" are impressive.

There is to add that only the American Constitution has the research of happiness as one of the most important value for the human being and this is remarkable.

But what happens when happiness can't exist because there is no freedom?

So, understandably each of us should be free to act as he/she wants, just keeping in high respect all the other people around him/her.

Benjamin Franklin, Thomas Jefferson John Adams were the ones who influenced the most the final Constitution of the USA.

But...Who were the Americans at the time of Franklin, Adams and Jefferson? Not just Sweden and British, populations arrived from many countries in the world and for the most diversified reasons. Irish, Italians, French, Spanish, Germans...

People who decided to invest the rest of their life in this new and still unknown distant Land.

They were the most diversified one and at the same time each of them needed to be respected. And according to you was it simple?

This book, 50 pages in total is able to sum in few pages the history of the American Human Rights, and trust me when I tell you that it hasn't been a joke and it won't be a joke for the future as well, to fight for the human rights.

Each period has different exigencies, each period, once a step has been reached, offers the opportunity to fight for something else. In this sense it's comforting because it gives the sense that the world is in progression and not regression.

You will see: there will be new fights waiting for the Americans, a land of warriors.

The book treats the history of the American History of Human Rights 'til at recent times, 'til at President Obama.

One of the most urgent problems of the USA once created the Constitution the condition of black people.
In the USA there was a situation of slavery. In particular slavery was a condition wanted and desired by all the States of the South of the USA because of their extensive plantations of cotton.

The Northern States of the USA fought for the abolition of slavery but of course the South opposed a great resistance. This resistance brought at a separation from the Federation, the creation of a new reality for these 13 Southerners States and the beginning of the War of Secession started in 1861 and ended up in 1865 with the complete failure of the South and at the same time in 1863 with Abram Lincoln who started to declare for ten States of the South the end of slavery, completed after his death.

What would have meant for black people this new freedom? Owning land, more dignity.

But do you think that this one was the end of the fights? No, of course no. The beginning of more fights for more rights.
The request for a rest of life spent in dignity.
Many important fights would have interested black people from that moment on.

Being able to spend time in the same café, bars, restaurants, schools, bus with white people the priority.

At the same time another group of people started to fight for their own rights: women. Women in 1800 stayed at home, perfect housewives but... they couldn't vote, they couldn't work but they had the same brain of men.
Women at a certain point decided that it was arrived the moment to change direction and to obtain all that freedom men had had for centuries. It was another turmoil for the system but at the end women won the first of many other battles to come.

In 1964 with the declaration of the Civil Rights Act a victory for everyone. Black and women as well.

We are in the 1970s and this time who tried to start to declare their own rights gay couples with at the end the permission for gay couples of building a family with an act wanted by Barack Obama.

The USA is a country very religious and this is very good. The USA is under the protection of God. In the dollar you can read In God We Trust, God is everywhere. Every President, not important if from left or right will always close or mention God in his speech several times and this is comforting and gives strength to the USA.

At the same time the gay rights created a profound debate about family and the meaning of family. Should a gay couple to have the right of build a family and adopt a children?

President Obama answered at these questions some time ago.

Wonderful book, I really enjoyed reading it. It's written very clearly, it's captivating, many questions will pop up in your mind trust me and it's a wonderful base for understanding a complicated, fascinating country as the USA is.

This books have been written for stimulating debates at school.
I suggest this text to all teachers and students.

Most students don't love history and it's a great pity  Teachers can win their diffidence with this book obtaining their attention. The past is the mirror of the present.

Our freedom exist because before us some people fought for us and we will fight for other rights and other generations will live more freely than us because they will enjoy rights that at the moment there are not.

To me  students will fall in love for this book, when they will keep in their hands this book because The fight for Freedom is not just a great lesson of History, never boring, but will pass through the various fights for obtaining rights by a lot of American citizens.

Trust me: there is nothing more stimulating and adrenalinic than fighting for a good cause.

Each of us fight for something, no?

I thank NetGalley and the publishing house for the book.