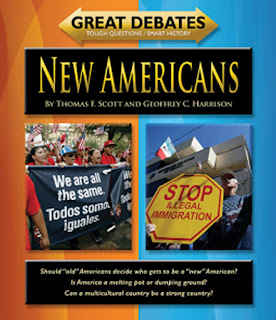 New Americans by Geoffrey C. Harrison and Thomas F. Scott published by Norwood House Press is a very powerful interesting book for students and their teacher about a controversial thematic, that as we will see hasn't been a  real novelty for America: the immigrants.

At first they were the 13 colonies. These people, British, constituted the first and most important community for the modern USA.

There weren't other people in the USA until the arrival of Cristoforo Colombo and the discovery of America. Thanks to this, new people slowly slowly afforded to the USA. Native Americans destroyed by the white man, we shouldn't never forget this dark page of history, and a new face started to take place.

Problems started to come when many ships arrived in the USA plenty of immigrants during 1800. The main concept at that time was the Nativitism and so the idea that people arrived before in the USA had to have best treatment than not the new ones, in terms of freedom and rights although as we have seen rights and freedom built slowly slowly by the various Americans. Please check out this book and my review: The Fight for Freedom .

The northern part of the world was considered from the first immigrants the best one, so Swedish, Germans people appreciated, while the South part of Europe read and seen as more "dangerous." Irish, Italians, Russian seen with suspect like also their religion: the catholic one.

The book asks if some Nativism is back today but maybe we should ask what it means for immigrants to afford to the USA and what it is today the American Dream.

In 1850 the discovery of gold and the Gold Rush and talking of immigration the arrival of people from Asia.

At the beginning of XX century government tried to reduce immigration.

Other errors from the USA committed during the First but also Second World War? Dauring the latest mondial conflict the USA rejected  a ship of Jewish immigrants. Half of them died tragically once returned home because of course captured.

I personally know immigrants who left our land and made fortune in USA and later Canada. If they would have remained here they would have spent a tranquil life but nothing more.

The book offers various point of debating and the story of immigration is surely articulated, at treats  very sad, and a policy that changes periodically the cards on table.

Very beauty book! Suggested to everyone not only students and teachers for trying to understand our actuality and the past as well.


I thank NetGalley and Norwood House Press for this book.