The Best We Could Do An Illustrated Memoir by Thi Bui 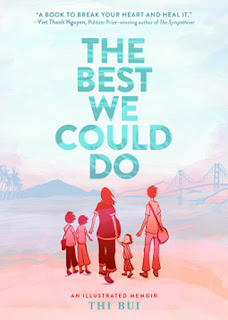 The Best We Could Do An Illustrated Memoir  is the first book by Thi Bui, the daughter of Vietnamese immigrants.

Of course this book will let us reflect.

Social conditions that couldn't permit anymore to live in the country in which her family was born.

I admit that I didn't know all the political story of Vietnam and the book is also in this sense very interesting and sad because this graphic novel through the personal stories of the various members of Thi Bui will live parallelally also the political story of the country with all its wars and divisions during the decades .

Emigration: what is this word? And why a person or a family decides to leave his/her country for searching for something better in another place?

Surely it is not a choice that it is done with light heart, I can tell you that.Our land has been a land of emigration during the 1950s and it still is.

It means to re-start from the beginning in a place where maybe you need to learn everything, including a new language. There will be other people and these people maybe will live you with hostility or with at first with a certain diffidence.
You will bring new customs and traditions and at the same time you must respect the laws of the country where you decide to go for a new living.
It's a sufferance. A sufferance and an adventure. Plenty of optimism, but surely if you leave a world devastated by war as it happened at the family of Thi Bui, your problems will be many, your heart will be hardest and heaviest than not the one of an individual who just wanted to try to better the life, without having experienced the tribulations and horrors seen and lived by the family of Thi Bui.

The separation of a person from his own land a sufferance that will remain for the first generations of emigrated as explain also Thi Bui in a passage that we will see later because you decide to break your root and to re-start, but you know for sure that your country, the life-style, the lessons you have learned and who you are and why you are as you are will follow you.

There is a moment in the book I love a lot. Thi explains many family tends to accumulate objects while they tend to live in a minimalism way. Once, while she was still little, the family was arrived from a while in the USA, close to their house there was a fire and Thi Bui run upstairs for saving an envelope. Just in case...In this envelope the most important and precious documents of her family:the green cards, social security cards. Their being Americans.


In 2005 Thi Bui has had a son and she asks in the book: "Do we live on in what we leave to our children?" I think so.
Children are our extensions once we won't be anymore alive. Our mirror, our reflection.

Thi Bui asks in another passage at the end of the book: "How much of ME is my own, and how much is stamped into my blood and bone, predestined?"

The author thinks that being the children of parents who have seen the horror of war will always mean to feel in part the "weight of their past" although surely Thi Bui knows that she won't search anymore for another homeland because she is American and that Vietnam will always be genetically a part of her, but in a little little measure.
In the USA she has found the stability her parents were searching for them and their family.

Thi Bui is also worried for her son because she thinks maybe she can transmits him her sometimes pains and sufferance but when she looks at her son she sees a boy that is free.
Free to claim his future, free to become who wants to become, in a land of peace and in a land marked by that American Dream wanted so badly because real by all the immigrants who, for a reasons or another escaped from their lands, searching and dreaming for a better future and for peace and stability in the Land of Freedom and Opportunity.

Beautiful, truly moving, plenty of flashback, memories and intense. Highly recommended for understand and never forget the profound connection existing between past and present.

I thank NetGalley and ABRAMS Books for this book.