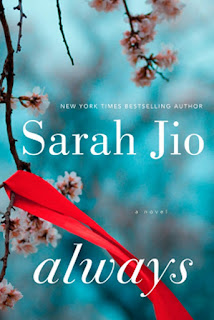 I checked my e-mail yesterday night and I received a message from Random House. The manager of the publishing house asked me to post as soon as possible a review for the launch of Always by Sarah Jio. Eeeek...Bloody Hell, not yet read, I thought in complete panic  without thinking that the launch was yesterday.

I decided to change my schedule and I started to read the eBook yesterday night. I finished it today.

You'll need to keep close to you a box of Kleenex because Always is moving and one of th most interesting love-stories I read since now.

I picked up this book by Sarah Jio time ago for various reasons.

I love her books, I had read previously other novels she wrote.
Seattle is in my heart.
One of my best pen-pals - yes you know paper and pen, envelopes and stamps, that dinosaurs thing of the 1990's - with which I am still in contact with is from Seattle.
One of my favorite movies Sleepless in Seattle set in that city.
Being a friendly reality I have also other connections as well.
I feel the thematic of homeless a lot and I thought while I read the synopsis of this book in NetGalley that this one could have been potentially a very good love-story. As always, my instinct didn't fail. I was approved and joyous for it.

Always by Sara Jio is impressive because it's not just a love-story.
It's something else. It's a love between a man and a woman stolen by destiny and then re-donated at the protagonists.
It's the book of second chances.

It treats of loss and return, of waiting, love and defeat, and at the same time of crucial choices in our life and understanding. Of real love able to set free the partner for love, of gratitude and dignity and sentiments respected.

The book is never superficial but profoundly explores the sentimental dynamics of a lady who thought she had found a stability in every sense and that maybe she must re-think all her life again.
Maybe.
Because the past better than the present, because simply, the love of the 20s for Cade too strong for being thrown away again not giving to it another possibility.

It's a book that will speak at the heart, at the conscience, at the life and at the dignity of people and their lives trying to have respect for every point of view.

The story starts with Kailey and Ryan, a happy couple at the italian restaurant Le Marche of Seattle.

Kailey is a reporter of the Herald and she reached the success she  desires. Ryan a very successful man. A happy couple who intend to start a life together, celebrating the joy of staying together with a wedding pretty soon.

Kayle is a reporter very involved in social problems and she treats the topic of homeless very often. That night while leaving the restaurant Le Marche while she was waiting for her fiancee and their car she notices this homeless pretty starved close to the restaurant. She presents him something to eat and when she looks at his eyes she recognizes him. Impossible to fail: this one was her boyfriend Cade McCallister, never forgotten.

Cade had a label and was very famous in the music industry of Seattle during the mythical 1990s. Why now Cade is here, in this state, homeless and what happened to him during these past 10 years? She asks a desperate Kayle to herself.

Kayle is shocked, and she starts to live in a life of flashbacks.

Oh: the power of the twenties and the magical idea that everything is possible and that life is in your hands. You can imagine to find mr.Right,   and building a good existence with him, having some children, working and being a satisfied girl.

In general it goes in this way, but not for Kayle.
To Kayle the dream of marrying the man she loved so badly broken. Broken because she knew something: that Cade was her Mr. Right and the man with which she would have wanted to spend the rest of her existence. And he just disappeared like a ghost from her, without to tell her why, without an explanation.

Once this dream over she didn't think at love anymore with the intensity of the past.

Two years spent together, from 1996 to 1998 one day Cade simply evaporated from her life.

Her dream of a family, of a love, some children, replaced by a successful work and other gratifications. Her heart locked until later she would have met Ryan. Other age, a more mature love, her sentimental life back.

Kayle accepted this second chance with enthusiasm thinking that life must be lived and truly loving deeply Ryan. Cade McAllister buried in some corner of her heart but now inoffensive.

But...What happen if the past returns, and which can be the reaction of a person at the return of someone so beloved?


It's what the book wants to analyze, and it does it with great maturity and class according to my point of view.

Memories of the moments  Kailey spent with Cade are back in all their intensity. They had lived a real, beautiful love-story. Walks discovering secret corners of Seattle, trips as the one they did at Big Sur, Carmel, Monterey, where Kailey's grand-dad knew his future wife, unforgettable moments for both of them, moments spent together enjoying the company of each other and thinking that yet, they were made for spent the rest of their life together.

Few characters all very well centered, the book doesn't know any kind of dispersion but focus in the relationship created by the two protagonists at first in 1996. The book is divided in two part: a first part is set in 2008 the crucial year of the return of Cade and a part from 1996 to 1998 the years of the first relationship between Cade and Kailey.

But in which state Kailey finds Cade? In a miserable one. This man must suffer of some mental retard, she thinks desperate. Maybe he remembers her, maybe not. At the beginning the reporter can't interact with him because the man is absent, starved.

Kailey once saved by him decides that now it's arrived the moment of helping her biggest love of her life, but at what price?

Ryan will understand her feelings? And mostly: is she still loving Ryan as much as she should love him considering that very soon they will be married?

Always is a book that tells of changes. The changes that can occur during our life, the differences that we can find in a person we love so badly and we thought we had lost forever and the acceptance of this person transformed by life but also of the immutability of love when the feeling has been real and sincere with all the crosses that can bring with it.

Jane Eyre by Charlotte Brontë is another example of a great love for a wonderful, conflictual man. At the end of the book the protagonist will discover that her love, unforgotten, Edward Rochester had lost the vision from both his eyes because of a terrible incident but she won't go away from him because real love is able to resist everything.

The title Always created because of a tattoo the protagonists once will decide to do while in vacation, in french, Toujours, while the cover of the book speaks of true love. There is the tradition of put a red wrap in a branch of cherries tree everytime you think you have found your true love.

I highly suggest you this book for the maturity I found while I was reading it. It is written by a writer who gives dignity to each protagonists and at the end of the book in the happiness and unhappiness that some protagonists will live, no one will be completely defeated by life because love will always win in every case.

I thank NetGalley and Random House for this book.