The String of Pearls by Thomas Preskett Prest 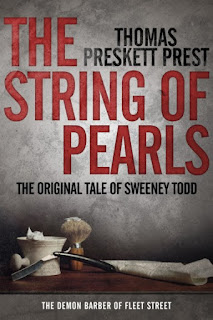 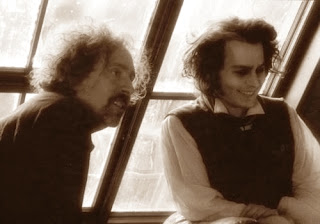 The String of Pearls by Thomas Preskett Prest is a dark book you'll love so badly.

It is in fact the story of the Demon Barber of Fleet Street.

Once, as also written in the London's biography by Peter Ackroyd Fleet Street was an insane little river, but because of sanitary problems and illness that the river brought to the people, during the time the administration transformed it in a street, although a touch if insanity it is still going on.

No one knows if this one is a legend or not.
Surely London is not just the capital of UK but also a city avid for blood and so it seems that once upon a time there was a weird weird strange barber called Sweeney Todd in Fleet Street.

This book, The String of Pearls inspired the legendary musical by Stephen Sondheim and Hugh Wheeler created and launched in 1979 and winners of eight Tony Awards.

Later Johnny Depp would have created, based on the musical by Sondheim with Tim Burton as director Sweeney Todd: The Demon Barber of Fleet Street. It was 2007.

The story of Sweeney Todd told in this book, is pretty different from the musical and the movie.

The horror, I wouldn't never read it differently, in different ways is left to the imagination of us, readers, but the book is written with great linguistic property and class. The writing style of 1800 is adorable because punctual, precise, can I add: perfect?

Anyway the lovely partner of Sweeney Todd, a barber of Fleet Street has a store with mr Jarvis Williams and there they sell wonderful delicious sweet meat pis. They are loved by everyone. They're the sweetest ones you can find around and who knows if attracted by mrs. Lovett or simply because the meat is so delicious, the store is always plenty of people.

Mrs. Lovett in love with Sweeney Todd, a good criminal pair this one.

Sweeney Todd has a good work as barber, although strangely not all the men who enter in his shop for making their beard go out after the work. Who knows why. A dog is still waiting for his owner...
Through a trap door Sweeney after the service, in general he cut the throat at his victims, would send them to Mrs Lovett for being "prepared" to becoming delicious meat for the customers of her delicious reality...

Sure something starts to go bad for Sweeney Todd. Killing means also someone who start to search for some missing people. Johanna is searching for her fiance, and at the same time also Colonel Jeffrey is searching for his friend Thornhill strangely missing. Where are them all?
Maybe in the stomach of some very satisfied people, who knows? but no one still know this horrific reality. Surely all of them spotted the last time close to Sweeney Todd's barber's shop. So later, where did they go?

Great relevance in the story also at the poor boy Tobias Ragg, one of the most interesting characters of the book, the young apprentice of Sweeney Todd...

Go for this book if you search for pure horror but also a horror told with great respect and without to go into details that could scare people. It's a classic, It says all the word: classics.The String of Pearls like all the classics has the characteristic of eternity and immortality.


I thank Endeavour Press for this book.