The Day I Met Ann Goldstein, American translator of Elena Ferrante and The Brilliant Friend 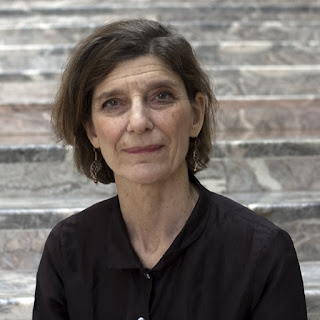 I confess it: when that afternoon, I went to Civitella Ranieri for the public meeting with Ann Goldstein I wasn't attracted by this public character because of her translations of Elena Ferrante's books, a name this one that didn't ring personally any bell in my mind and that I misspelled when I would have spoken with her later.

Let me add, vice-versa that I was surprised and happy that I would have met the translator of Primo Levi, one of the italian men I admire the most and also Italo Calvino and Pier Paolo Pasolini.

The most, that afternoon that I drove to Civitella Ranieri I was searching for the ex editor of the New Yorker.

Being a little reporter of a regional newsmagazine this time I would have met someone who worked for one of the most important American magazines, the New Yorker.

I read with pleasure their pieces. I started with John Seabrook and his long reportage about Isabella Dalla Ragione's old fruit trees, in Città di Castello  years ago. I translated at that time with the help of a swiss lady, all that piece!

I discovered Solomeo and the reality of Cucinelli thanks to a long reportage realized by the New Yorker, an issue presented me by a friend of an American friend of mine, Constance Grayson during a dinner shared at the house of an Australian lady, Cathy. No idea who that man was since I didn't read that article.

You will think: you live in Umbria but you know these news thanks to American magazines? It must be my destiny, I guess.
Jokes apart, I was absolutely thrilled.

The event was called: The art of the Possible, so what it means to translate from a language to another a book and it took place in a sunny Sept 7th 2017.

I wanted to speak with Ann before to start the meeting and it was possible.

Skinny, delicate, gracious smile, melancholic eyes, I discovered a passionate journalist, plenty of curiosity and capacity of listening.
We talked about her wonderful italian.

She said me she learnt italian in  a few months thanks to her knowledge of old and new languages like french is and her many travels in our country, the place she loves the most.
I personally discovered a sense of normality and a familiar approach that I loved.

The meeting was the most participated one.