The Climate Casino Risk, Uncertainty and Economics for a Warming World by William Nordhaus 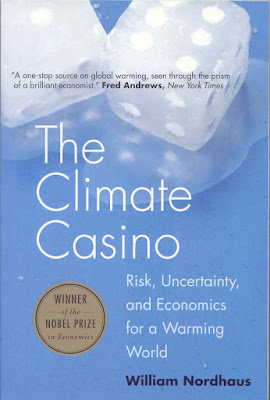 The Climate Casino Risk, Uncertainty and Economics for a Warming World is one of the book written by the 2018 Noble Prize Winner in Economics William Nordhaus on the topic.
Sterling professor at Yale University, this intriguing, captivating reading is one of the perfect gift for this Christmas, and it should be read by everyone for trying to better the situation of our Planet.

Little things can make the difference, in fact if people are united and if this problem is shared with everyone and known for finding right solutions.

But what is it happening realistically to our Planet?

Although some politicians are skeptical, followed by a lot of skeptical people, global warming is a reality and there is not too much time left to our imagination before that profound changes will effect our existences and the ones of who will live after us.

Let's remember that quakes, tornadoes, floods, abrupt and dangerous changes of weather in grade of causing a lot of problems, death, damages are the result of this climate casino, as the economist calls the problem.

Nordhaus reflects that also in a past era the Earth suffered of a profound transformation in a few decades; just, now, these changes are strongly helped by men and our massive production of CO2 and these changes are mainly caused by men.
So, what to do?

Carbon, electricity; human existences based on the use of petrol, our lives are permeated mainly by electricity, cars, travels, daily actions we think absolutely innocuous, like the use of a smart phone, a PC.
You won't never believe it but every simple action during our day means a big problem for our Earth including the innocuous use during the winter-time of heating system existing in our cars and houses.

It's the system in which we live in and the one, we thought, could give good answers to us.

With a brilliant explanation, the Earth probably will experience a radical changes in a few decades or less and it will mean a profound stress for people and animals.

People: where there is possibility of cultivating maybe climate changes will mean more warm and less productivity; there will be a consequent migration of people in other places, but at the same time maybe some places considered real Paradises at the moment will disappear.

Some species of animals will disappear or are disappearing, or disappeared recently and climate changes are affecting also Oceans with the acidification of water. What it means: the production of CO2 enters in communication  with the less profound stratification of water causing a toxic chemical mixture in grade of killing seashells and other important animals.

Climate changes will mean also water rising, considering what it is happening in the North Pole and in the Antarctica and when permafrost will be melted new illnesses and viruses completely forgotten memory of a remote past will reappear. Maybe.
For sure mr. Nordhaus focuses the attention on diarrhea and the arrival of malaria also in areas where the illness not yet experienced.

At the same time deleting from the daily life a system more than practiced, like it is the one passing through petrol and energy sounds impossible in the immediate and more expensive for governments and private citizens.

Personally I think that big companies should give quick and urgent answers for sorting out a problem that can't wait anymore I would want to see a complete green smart phone rechargeable with solar energy. Big companies should start to use this option green and healthy in every sense.

I thank Yale University Press for the physical copy of this book.