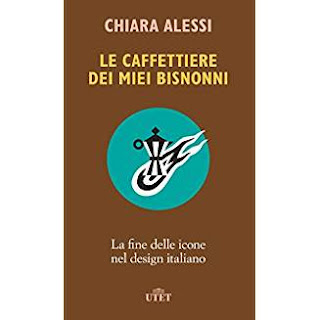 I was prepared to read a book about sweet memories of a family who created an object that will continue to be used per generations although not anymore Made in Italy in the strict sense of the word.
We speak of the italian moka, the caffettiera, where you taste the best coffee that you can dream in this world.
It was the opposite: Le Caffettiere dei miei Bisnonni La fine delle Icone nel Design Italiano The Mokas of my great-grandparents The End of the Icons in the Italian Design by Chiara Alessi is a polemic, disenchanted book about our times, consumers and their relationship with objects passing trhought the history of her family and the one of  historic brands.

Published by UTET this book is wonderfully beauty.

Everything started with Alfonso Bialetti and his moka. The invention would have meant for the second generation of the family incarnated in Renato the chance of feeding wagons of people thanks to the abundant work that there was: million of people at the same time tasted in the wonderful moka the coffee: 300 million caffettiere have been sold thanks to the geniality of a visionary man sold.
At the moment the Bialetti is just the pale memory of the old good times.
Alfonso Bialetti was a relative of Alessi: both of them remembered because they marked the old Made in Italy with good products that, simply, made the history of Italy.

In this sense the author is pretty polemic regarding the new times where objects are not anymore icons; maybe because icons just don't exist anymore, replaced by objects discovered for their functionality and lived without that love, affection that in the past there was for the caffettiera, the moka, for example.
Let's say that our times have lost that preciosity for the objects that there was in the past.

Not only; the author writes of a past, present and future that are a continuous present at the moment. All the possible complexity of time is disappeared.

Icons, writes the author, became icons because they were defined in a certain time where present and time meant a lot.

Present at the moment doesn't give any stability or credibility at the future.

Bialetti with the moka became a synonymy of modernism fighting against classicism; the author remarks that there is not anymore originality and uniqueness, but just products without soul. And people? Consumers? They are confused.

Modern icons, the so-called status-symbols work for remarking that the consumer is in grade of buying it; these modern objects are not symbols as in the past, of an affectionate, indispensable tool in grade to recognize not just a family but a country. A country. It's an enormous concept but real. Why? Because an icon is not just an icon: it's the symbol of a country, of memories, it speaks of the place where it is born in; it serves for obtain the best, but at the same time it incarnates the spirit of the country: and the country whispers through that object.

Icons remains. When an object is beauty, functional, remains young also if time goes by.

An icon is ageless: it's present, past: it speaks of people, aspirations writes the author.

Not only: there is more. In the past objects where made for being part of the daily rituals of a family. They were warm, they were part of the life of people.

At the moment publicity created, writes the author the desire from masses of entering in aliens and unknown worlds; these worlds will remain aliens and an object, also the most expensive one is not chosen because good but because a "status-symbol." In this poor scenario objects don't present anymore any kind of passion and enthusiasm as it was in the past, but worries, stress.

A big role is played by technology and the modifications created in people's behavior; "all and now" are constant of this world. We experience, writes the author a desire of having something that once realized don't interest us anymore. We want something else.

This comparison is very good to me: the author thinks that the consumer is like Vladimiro and Estragone the protagonists of Waiting for Godot by Beckett.
The protagonists wait and wait: they don't know who Godot is...Their waiting is pretty dangerous for their existences.

At the same time the consumer doesn't know what he will buy but he stays in line per hours for buying a product because trendy and because everyone want it.
We desire to desiring. We desire to be like all the rest of people.
Beautiful book this one, written with heart and written with that melancholic touch presented by our modern age.

A society this one, unable to speak to the heart of people (if looked in the surface) and unable to  remain; the only consolation? Our past, made with heart, with friendship, love, work, and real values.
Since we won't return at that point, humanity will be a desolated land with less heart and less humanity.

Many example will involve also other objects of designs.


I thank DeaPlaneta for this eBook.