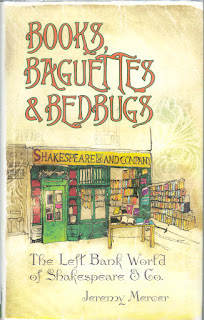 Everyday switching on my smart phone I visualize the wallpaper of Shakespeare and Company and their most important motto: "Be not inhospitable with strangers. Lest they be angels in disguise." It's
encouraging and optimistic and a window in the world.

We return to Paris thanks to the extraordinary book written by Jeremy Mercer: Books, Baguettes & Bedbugs The Left Bank World of Shakespeare &Co. published years ago by Weidenfeld & Nicolson.

If the first bookstore created by Sylvia Beach at rue de l'Odeon 12 was the excellent and exclusive refugees for promising, excellent intellectuals and writers like Ernest Hemingway, Francis Scott Fitzgerald, Gertrude Stein, Ezra Pound and many important publishers, without of course forgetting James Joyce, who received a crucial help for the publication of his Ulysses and Finnegans Wake thanks to the devotion and dedication of Sylvia Beach, the new reality of Shakespeare and Company located at 37 rue de la Bûcherie changed song.

The bookstore became the refugee of people who desired to heal  from the wounds of the past, from a loss, from a traumatic experience, from a sad past; we speak of young and less young people, as you will read.
Yes, because the universe of Shakespeare and Company was plenty of diversified realities.
Not only: each person was a tale, still unwritten, walking and working in that store.

Shakespeare and Company was a place where to find answers and protection.

The story of Jeremy the author of this book is remarkable. He was a good crime reporter in Canada, but then terrorized because he published the name of one of his main source in a book, adding also other facts he was involved in, he decided to resign from his job, leaving for Paris, where he would have studied some french. Canadians speaks fluently two languages: french and english.

Jeremy Mercer didn't resign from a starving position, I want to clarify: he was a successful reporter, he lived a beautiful life, just... lately crime absorbed too much his mind and he became stressed by what he saw. Also the most normal scene, a parent accompanying a little kid to school became to him something else: a horrible pedophile close to a poor kid ready to experiment real hell. There was a clear distortion of the reality.
It was the end of 1999; the arrival of a new millennium; exciting, fear. Paris was beautiful as always, the end of that year.

Money run out quickly and Jeremy didn't know anymore where to go.

He didn't want to ask for some money to his parents; he needed to find a different place, someone in grade of giving him hospitality or a job for paying the hotel where he lived in. But where and who?

It was a Sunday day when he noticed Shakespeare and Company. Tourists in general are addicted for this place when they afford to Paris, but you see, Jeremy hadn't still visited that store. No sure why, he left it behind, arriving in the right moment in the right place.
A girl offered him a cup of tea, asking him if he wanted to spend some time with them, all together, upstairs.
An old man told Jeremy that he knew he would have asked him of living in that bookstore. Grumpy person, Jeremy didn't know anything of the possibility offered by Shakespeare and Company of a free bed and some free food but he tried, because he didn't have anything to lose; and George, the day after, offered him a bed; a roof where to sleep; some new certainties and a new start.

George Whitman, the new owner of Shakespeare and Company was a  singular person. Born in Massachusetts he studied at the Boston University.
A real communist in Paris; he told to everyone that his grand-dad donated to his dad the Bible, but that his dad donated him the Manifest of Karl Marx.

George thought that it was indispensable to donate to others; to share, to be compassionate. His time, a bed, something to eat; after all we don't need a lot for a living.

"Give what you can; keep what you need" he repeated.

Frugal man, he loved to spend very little amount of money for feeding himself and his guests. And the young guests at Shakespeare and Company learnt how to shop following the philosophy of George.
They waited the end of the market for buying or just bring home some veggies. Maybe not the most beautiful ones, but eatable for sure. Whitman could do scenes if they bought sugar spending more than the necessary.

George Whitman had a wonderful habit: on Sunday morning loved to prepare pancakes for everyone. A long tradition waited from all the guests with great pleasure; it was another way for staying all together, chatting, eating something different; it was Sunday, it was a day of feast.

Without George Whitman, seriously, most people, most men and women wouldn't never have found a way;  they wouldn't never discovered what it was wrong in their existences and how to fix their problems for then, going on. Whitman was a souls-savior under many aspects.

George Whitman was 86 when Jeremy started his experience at Shakespeare and Company discovering that married a girl in her 20s and something when he was 70 years; that he had had a daughter and was plenty of problems: he thought that once dead Shakespeare and Company would have been sold by his ex wife; later Jeremy assisted at the love-story born between a girl of 20 years for George; he wrote her poems; she kissed him for later move on, leaving George in a tremendous, depressing state. George became a man of 86 years not anymore a young spirit in the body of an old still energetic man. Jeremy started to be worried.

Jeremy fell in love for a girl, Nina, and as you will read it was an adventure: bathrooms in Shakespeare and Company were antiquates so it was necessary to go to a public place, the ones for homeless for a good shower and for appearing decent at the eyes of the beloved girl.

But you know: these broken existences, these destinies channeled in this bookstore by a sort of serendipity, by a mixture of events and misfortunes couldn't proceed harmonically together, because they met each other in a moment of stress; in a moment of lost of identity; each of them was searching for answers about their existences and once obtained them, they were ready to return outside, leaving  the protected, blessed walls of Shakespeare and Company, George and the companions met in the bookstore.

Slowly, the group, for a reason or another started to lose pieces; and each person returned in the real world, searching for that bit of personal peace, success and satisfactions.

In the book you will find the complete story of George Whitman and family, the arrival of Sylvia Beach Whitman thanks to the help of the author of this book Jeremy Mercer; now she is the owner of Shakespeare and Company.

With the time, added Jeremy a lot of things changed in the bookstore. Now credit cards are accepted, there is a phone and let me add, internet connection.

Maybe Shakespeare and Company changed some bits, but the legacy created by George Whitman is incredibly important and crucial, and maybe also for this reason, that place is so magical.

There are the breaths of thousand lives and existences passed through that bookstore absorbed in that walls; like the ones of used books passed from an owner to another, all these invisible voices whisper to readers and tourists of all the world their stories and the enchantment of a place where they rested, worked, where they re-discovered the pleasure for living.

"We were through the rabbit hole and into the world of Shakespeare and Company, where down is up white is black and nothing is ever normal" writes Jeremy.