Inventing Tomorrow H.G.Wells and the Twentieth Century by Sarah Cole 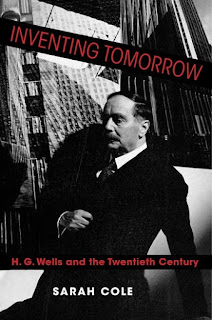 .G.Wells and the Twentieth Century by Sarah Cole is a new biography published by Columbia University Press and one of the most engaging ones that I read.

H.G.Wells was a very loved writer; loved by everyone. Intellectuals, politicians, but also common people. He made the difference, with his ability of telling scientific fiction or frustrations, realities of the modern man. Translated in the entire world, his powerful message and his visions remained substantially intacted if compared to the rest of the other writers, contemporaries, read less, after their departure.
Where is the originality of the books written by Wells?
Apart his writing-style, there is also another factor: the possibility of looking forward, imagining a beautiful future not disconnected by science, time travels, and a wonderful new order.
Wells described future, but also education, innovation. He wasn't interested to describe a lost past as many other writers did.
He was born original and he preserved this originality also when he became a teacher. He was someone in grade of seeing things, feeling the future in a complete different ways from his colleagues and the times. Considering the social class he was born in, not elevated, his brain was considered absolutely beauty because in grade of presenting to the world a different perspective and vision.


Two beloved characters will be Kipp and later mr.Polly. The adventures of this second one let us see  contradictions, hopes, desires of mr. Polly, like also his failures and aging.


What for sure did Wells in his entire life was to find a different voice; an original one; and in this sense he was part of the modernism, but he was also a strident voice out of the chorus, someone who publicly declared that a possible optimistical future was possible: someone who described with veridicity and singular portraits protagonists of his books, still beloved and greatly appreciated.


His scientific novels were an open door to the arrival of science, biology in the existence of people and in the society. In The Island of Dr.Moreau the idea of blindness and the needs of blind people, were not seeing as a condition of disability but an open possibility for a best future also when sick. For that period a revolution of thought.


After all what Wells wanted to tell were stories of ordinaries people, giving to them a precious, extraordinary insight. There were other two writers who tried to describe modern man seeing him face-to-face in confrontation with the First World War: James Joyce and Virginia Woolf. Of course the vision given by these two writers was distorted by the advent of the First World War and the Spanish Flu, but what made Wells was something different: seeing beauty, harmony also in difficult, contradictory times.


After all what bring, as a message, a catastroph like a war, or something similar? The seed of piece, harmony, beauty for the world, friendship, love.


And who were people in grade to make this difference? Civilians of course; the ones who had fought during the war, the ones who would have later built a destiny and a world of peace.
Wells was attracted, terribly attracted by time and what it would happen in the future. He had a special compulsivity in imagining a possible future and he searched, always searched for these answers, for these possibilities, in his writings and in his daily existence.
Not only: future couldn't be negative at all,but a wonderful place where living in.
Wells considered the modernism, the times in which he lived in, an absolute chaos; but, this chaos, this disorders born because of wars, illnesses, were and are a big opportunity for a beautiful future.


I highly recommend this biography by Wells, but also his production. In these difficult times a balm for the soul and an optimistic vision for our future.


I thank Columbia University Press for the physical copy of this book.