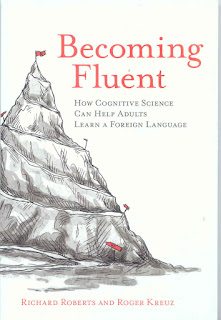 I have chosen this book by MIT press Becoming Fluent How Cognitive Science can Help Adults Learn a Foreign Language by Richard Roberts and Roger Kreuz because I know a lot of people who learnt a foreign language once adults and with great success.

Learning a foreign language means a lot of motivation but with this book you won't fail for sure, because it unifies the best new informations that there are about learning and also how to do this with profit and without losing too much time.

All of this, thanks to cognitive science. This one is an interdisciplinary movement that began visible in the 1960s knowing affirmation in the 1970s. Cognitive science involves a lot of disciplines: psychology, linguistics, philosophy, neurosciences, artificial intelligence, anthropology, education.

But, first of all Becoming Fluent starts from an encouraging assumption: forget that if you are adult you can't learn another language if you put desire, hope, expectations, work and enthusiasm in this adventure.
The adult brain is more "flexible" (look at the chapter "meta") because more experienced than the one of the child so there are strategies that can be found and used for learning a language only in an adult brain.

Sure: the brain of the adult is not anymore a sponge in grade of absorb everything. The adult brain absorbed, elaborated and became what it became also thanks to experiences, facts, and life spent.

Less fresh than the one of a child positively let's add that a new language means a new start.

New enthusiasm for a new culture, new people, a different country, different traditions, new discoveries. Learning a language is not simply a story confined in a different tongue but it is also the adoption of an entire different way of living that maybe will always remain abstract and distant for you but that you wouldn't never have known or appreciated if you wouldn't have embarked yourself in this adventure.

Becoming Fluent will explore with you all that errors you shouldn't commit like learning words or phrases memorizing them and then, of course once the lesson is gone and you made good figure with your satisfied language teacher (eheheh), not remembering where to allocate them and more horribly discovering that you don't know anymore what they mean because you used them just for that lesson.

A common error this one.

I have known people like these ones. They have excellent scores in general. I remember a classmate in grade to learn an entire book as a parrot but if interrupted wasn't in grade to tell to teacher nothing of what previously said.

Where these people lack?

They memorize but they don't learn.

The important process when you want to start to learn a language is  setting some goals trying to imagine yourself and what you will learn in a month, two or three with realism, without putting you too down or in a stellar position.

If you do that and if you surround yourself with people more or less of your same learning-level you will see improvements because you won't be alone. A companion, a friend, is important during a course and being surrounded by a person at your same level will create a comfort-zone. You won't be surrounded by a person too prepared and in grade of putting you down or less prepared than you and in grade of not adding anything good to you.

In english there are levels of knowledge of language from 0 to 5 but did you know that in the USA there are people who couldn't pass a level 5 test for example? A language is tested by fluency and of course accent.

In the book various exercises for stimulating our memory.

There is to saying that many scientists think that knowing another language can exercise the brain in a very healthy way keeping it young.

Another interesting experiment proposed by the author will involve distant memory.

In the book is cited a book I love so badly and that I read when I was a teen-ager, Psycho-Cybernetics: A New Way to Get More Living Out of Life by Maxwell Maltz. Maltz was a plastic surgeon. He discovered that most of his patients wanted to change their faces or part of their bodies because of a profound interior sadness and that's why he wrote this motivational self-help book.
Maltz talking of  new houses said that it is necessary three weeks for perceiving a new house as home. At the moment scientists think that things can be different, it mustn't be precisely three weeks and same is for a language.

Try to incorporate your new language into your daily life because as previously said it will be a winning strategy.

Why reading this book?

Because it speaks of new languages, of our brain, of our habits, of errors  frequently committed when we learn a new language, because it will give the proper tricks for not failing thanks to innovative studies and because it is encouraging.

Highly suggested! to everyone good luck with your new language.


I thank MIT press for the physical copy of this beautiful book!