Heartthrobs A History of Women Desire by Carol Dyhouse 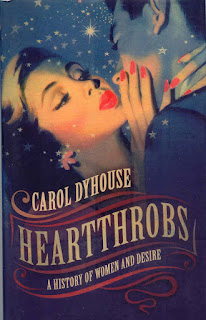 Heartthrobs A History of Women Desire by Carol Dyhouse is a very wonderful, interesting, captivating book about our desire regarding men and how this desire changed during the decades influenced by what society put out in terms of new actors, pop stars, bands, singers, movies, books, the net.
Beautiful cover, wonderful pictures inside, this one it's a book that you will read and re-read and that can be of great inspiration if you want to discover some romantic books, or movies that made the history of women's desire, or books where researching other informations about this topic.

This one is a real study of women's desire and their perception of men. We will see how myths like actors, pop-stars influenced us during the course of the decades.

In the past the idea of the perfect man was Mr.Darcy in literature, and in the past the doctor in real life appeared like a good social party for a good marriage and economic stability.

Women started to dream about Prince Charming an educated man, absolutely brave, fearless, with a lot of charm strong able to fight for reaching and winning the heart of his desired woman winning every possible battle helped by the arrival on the big screen of Cinderella and White Snow but also thanks to certain literature, where there was this scheme: the brave, masculine male character and the adoring sometimes problematic life of the girl that needed to be saved by him or that just knew this adoring and perfect man and fell in love for him.

A dream of course but generations of women grew up fed up by this ideal, although slowly things changed. Women started to settle down creating families in UK at 16-17 years, and only in the 1970s marriage won't be the first institution researched and time for a family procrastinated.

Also the sexual desire of women was seen under a different aspect if compared to the one of a man in the old times.
A man could feel his desire, could prove his desire, a woman until recent decades better if sexually docile, and that's why the poorest social classes and prostitutes the ones who could "feel it" and can you believe it? could be associated with beasts, because "socially authorized" to prove desire exactly like men, while a so-called good girl couldn't at all if of good family. With the time things changed and the discovery of a different and more free sexuality, lived with freedom and joy not anymore a taboo.

In the book analyzed various romantic books like Gone with the Wind, with a protagonist, Scarlett O'Hara, constantly dreaming for someone very weak like Ashley Wilkes while she unconsciously rejected her husband a symbol of sex-appeal as Rhett Butler was. Surely not a saint, but someone with clear ideas, a strong character and someone solid close to her under all aspects and in love for her. That man potentially would have donated to Scarlett everything just for being loved. But Scarlett didn't see his love, didn't see that she found happiness with Rhett, too tortured by her private obsession:  that wake man of Ashley, ruining everything.

The Thorn Birds, appeared in the 1970s and in this case it's the impossible love-story of Meggie and a priest: Ralph. Ralph, the story is set up in Australia will slowly grow up under all the possible aspects little Meggie. Once she will be married, with a violent man they will start an affair and this relationship long an entire life.

After a period of great success for Prince Charming, he could have signed, if existed autographs all over the world, in general Hollywood and literature thought that it was better to change song: Prince Charming became a weak ideal of man, someone without character, maybe more close to a woman than not to a realistic man and real men, with their lacks started to appear to the horizon. The book didn't consider cartoons like Shrek emblematic to me of a common ogre, ahem, man.

Apart Shrek and cartoons, strong of Nine and Half Weeks of the 1980s, unforgettable movie with Kim Basinger and Mickey Rourke based on a real story of sex and perdition the arrival for newest generations of girls of Fifty Shades a trilogy of sexy books and movie about wild sex implemented by sex gadgets for experiencing additional sensations.

With the transgressive business man,never tired and always ready for great sex once returned home, another dreaming creature for women thanks to sexy young actors movies and books as well started to appear to the horizon for keeping our hormones in great mood: vampires.

Substantially because in the female imagination vampires are symbolism of great sex. They're seductive creatures, someone in grade to keep the woman wanted and desired. Pity that, at the end what interest to them thinking also at their condition, they're not dead and they're not anymore alive, they live in a coffin, they can go out just during the night from their little tiny place, and they're damned and condemned to live an existence pretty heartless, is just woman's blood and nothing else.
Women's vampires are famous because they eat children, the same thing can be done by a male vampire. Have you seen the movie by Francis Ford Coppola? Right. And of course if they suck your blood be careful because you can also become a vampire as well.

But in the sexual imagination seeing two sexy beasts like Tom Cruise and Antonio Banderas in Interview with a Vampires based on the masterpiece written by Anne Rice more than a justification for dreaming the arrival of a great, sensual vampire in their life. With all the implications and complications of the case, of course.

New TV series and movies based on books like the saga of Vampires Diaries and Twilight revived the vampiric spirit.


I surely thank Oxford University Press for this entertaining, wonderful, old-fashioned book. Oh, I know it: you'll love it!